Hello, my name is Jill. 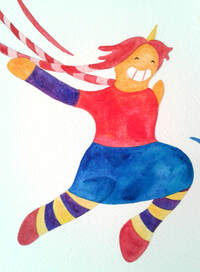 I was born in San Juan, Metro Manila in 1975, and though I've been scribbling and drawing for as long as I can remember (which is as far back as about age two), I didn't take my first formal drawing or painting lessons outside of school-school until I was about 13 or so.

I wanted very badly to study art in college, but didn't get to go to UP Fine Arts until I was in my early 20s after I'd gotten my first job, and I didn't have my first show at Boston Gallery until I was 30. I guess you could say I'd always been a late bloomer (and even now I reckon I'm still waiting (or hoping) to bloom, fully).

Since then I've had over a dozen solo exhibits at the CCP, the ArtistSpace of Ayala Museum and a number of other galleries around the metro, and some of my work has also come out in children's books, magazines, a postage stamp and other places. You're welcome to download my artist's resume (which should be floating around on this page) if you have need of it.

I now live and work in Quezon City with my demons and my stuffed animals, writing for a living during the day and painting for my soul at night. I'm afraid I don't get out much (except in my head), but I will if I have to for sushi and strawberry ice cream.

I paint “monsters”, which is what I call anyone who isn’t entirely human or belonging to a naturally occurring species (on this planet, at least). Most of my monsters are what you get when you add animal, plant or non-organic characteristics to a humanoid base.

To me, these monsters are people who are intelligent, and have feelings and distinct personalities. Because of this, I believe that each of the monsters I create has a story to tell based on who he is, what he is, and where he comes from.

My monster images continue to evolve from interpretations of the monsters I grew up with in fairytales and mythology to explorations of monsters in specific habitats. I deeply enjoy depicting my monsters in scenes or situations where they might be interacting with one another or with humans.

In depicting my monsters, I use watercolour, acrylic, acrylic and oil pastel, and oil because of how these materials lend themselves to fine detail and expressive texture.​

By taking my viewers to worlds where monsters are readily found, I hope to encourage them to think about how it might be possible for them to get along with people who look different from most everybody else.